The use of sport banners have been employed in many sporting activities, soccer fans create various types of soccer teams banners, basketball fans make basketball team banners, softball fans make softball banners etc. Sport banners are not only created by the fans, the management and administration of a sporting team can also make banners, this is mainly for business or sponsorship reasons. The management would sell banners to the fans and supporters of the team to make profits and increase their fan base. 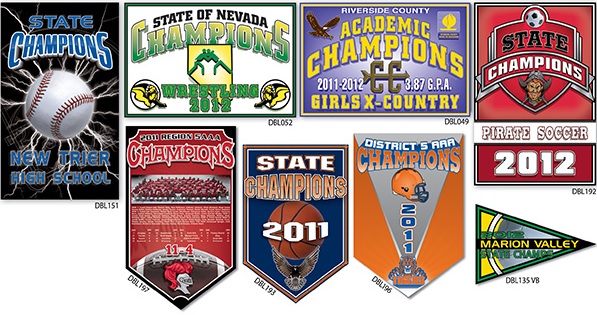 Banners of various size are made, ranging from the small flag like pocket size banners to the very large sizes that covers significant areas of the stadium. Banners of different quantities are also made by fans and management of the sporting teams depending on the occasion or environment which this banners are to be used, banners are made from different materials ranging from the cheap sac like types to the very expensive cotton or silk type. Banners are not only displayed on the stadium or field of play, some of these banners can be displayed in the fans living room, cars etc.

Fans generally create sport banners for numerous reasons, the commonest reason is to show support and as a means of lifting the team spirit. There is a very common saying in the game of soccer that fans are the 12th player of team, this is because the fans are capable of motivating the players and make them play better than they would on normal days without the fans support. This is the reason why most sport teams perform better on their home ground than away, because many of their supporters would show up and the level of play would be improved markedly.

Another reason why supporters make sports banners is to make requests or demands. Fans may need to make their requests known to the players or the managements of the club side and one of the most effective way aside appointing delegates or representatives is the use of sport team banners, an example of this is seen in the case of Arsenal FC, the fans once made and carried banners saying ‘wenger out’, demanding the immediate removal of the manager of the football ball because they thought he was the reason behind the poor performance of the team.

Sport team banners are also made to celebrate a very important player, a coach or some other person that have been associated with the success of the team. Other prominent members of the society or community can also be celebrated in sport banners, an example of this is seen when some Chelsea FC’s fans made banners to celebrate the Queen of England on her birthday. Banners are also made to celebrate or remember special events or historical happening which occurred around that space of time in previous years, an example of this is seen when Liverpool FC’s fan displayed the banners saying ‘never forgotten‘ in remembrance of 96 of their fans that died in a stadium crash in 1989.

Fans also use sport banners as a medium to trash talk, this is seen mostly in football and basketball team banners where certain messages would be inscribed on papers or on a piece of clothing and directed to the fans or players of the other club, most of the times this kind of messages are rather abusive and would brew violence and generate some level of bad blood between both sides. Fans also make banners for person reasons other than those stated above, some fans make banners in a bid to advertise their private businesses, stating their contact or address and at times some of these advertisement banners are captured by the camera and shown on TV.